The Safeguarding Partnership Board (SPB) has launched its annual purple themed campaign to tackle domestic abuse in the island. This particular campaign focusses on coercive control behaviour. 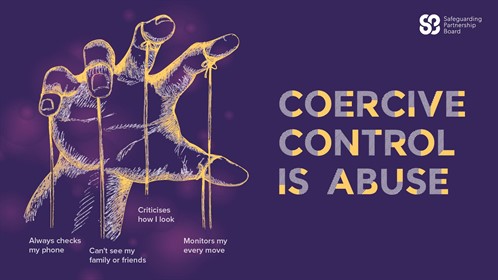 Coercive control involves situations where somebody subjects another person/s to persistent controlling behaviour and makes it clear that standing up for themselves will be punished. It can happen in any type of relationship and is not exclusive to intimate relationships. The perpetrator’s tendency to coercively control doesn’t disappear if the relationship ends – it remains within the perpetrator, and therefore has the ability to span more than one situation.

Estimated to affect one in four women and one in six men in their lifetime, domestic abuse is a complex and challenging issue which can wreck lives and devastate families.

During the campaign a series of multi-agency assemblies cascaded through the island’s secondary schools; delivered by experts in their field, they focused on educating young people on the early signs of coercive control, what is and isn’t acceptable in relationships, and where to seek help and support if they or someone they know should need it.

The States of Jersey Police (SoJP) invited islanders to privately submit questions around coercive control, or domestic abuse more broadly, via their Facebook Messenger. The questions were answered by officers and support services, with both Q&A shared on an anonymous basis, through the SoJP Facebook page.

Artwork referring to the warning signs of coercive control and where to access help were strategically placed across the island and through the social media channels of relevant agencies, using the hashtag #CoerciveContol. Kairos Arts charity opened a pop-up shop in Liberty Wharf with artwork and products created by survivors of abuse available to purchase as well as staff from referral agencies speaking to anyone with questions.

Sarah Elliot, Independent Chair of the Safeguarding Partnership Board commented: “We know that coercive control can often be the starting point of abuse, building in severity over time and sometimes resulting in physical abuse. Educating islanders, particularly the younger generation of the early warning signs, is one of the strongest chances we have in combatting this and preventing future cases. The Safeguarding Partnership Board and all of its members remain committed to providing support and resource to those effected by domestic abuse in Jersey.”

Last week, a consultation for a new Domestic Abuse (Jersey) Law was launched. The law will, for the first time, create a statutory definition of domestic abuse and will acknowledge controlling and coercive behaviour as an offence, as well as importantly recognising that abuse does not only occur in intimate relationships. Islanders are encouraged to get involved and provide their feedback in order to ensure the law is as effective as possible.

Where to find help and support