As part of this year’s National Awareness Day on Sunday 18 March a range of organisations and senior leaders in Jersey are joining forces to raise awareness of child sexual exploitation this week.

The Jersey Safeguarding Partnership Board is leading the campaign with support from the States of Jersey Police, Jersey Youth Service, senior civil servants and politicians and Jersey’s new Children’s Commissioner.

States Police Detective Superintendent Stewart Gull, vice chair of Jersey’s Safeguarding Partnership Board and lead for CSE, said: “The safeguarding of children in Jersey is everybody’s business. Any child can be sexually exploited no matter what culture, ethnicity, religion, whether a boy or a girl from any background.

“Jersey is joining the National Child Sexual Exploitation Awareness Day on 18 March and this week we will be encouraging senior leaders and figures in Jersey to raise awareness and join the conversation on social media. #CSEDay18

“Together we can create a mass awareness and zero tolerance of Child Sexual Exploitation.

“In 2017, our Multi-Agency Safeguarding Hub (MASH) assessed and managed 25 cases of suspected and potential cases of CSE. There remains no evidence of organised sexual grooming here in Jersey and the effectiveness of strong awareness and partnership working indicates incidents of CSE remain low.”

Awareness of child sexual exploitation is being raised through a campaign asking people to write personal pledges on their hands and share on social media.

National Child Sexual Exploitation Awareness Day aims to highlight the issues surrounding Child Sexual Exploitation (CSE) by encouraging everyone to think, spot and speak out against abuse where adults might be developing inappropriate relationships with children or young people might be forming inappropriate sexual relationships with their peers.

Home Affairs Minister Kristina Moore, who has lodged the Sexual Offences Draft Jersey Law which will be debated in the States on 20 March and will debate the issue of consent, has added her support to the CSE campaign. She said: “Although the number of Child Sexual Exploitation cases in Jersey is small, it is a real issue that needs to be taken seriously. This is why it is so important to raise awareness. Currently many Islanders will be under the impression that CSE does not happen here, however recent cases have shown that children are becoming victims – and many do not even realise it themselves.

“There are a lot of agencies and support for victims of this type of crime in Jersey which affects people from every different background and ethnicity.”

The Jersey Youth Service have designed new CSE leaflets and booklets which young people, professionals and parents have helped put together. They provide details on what CSE is, signs to look out for and where to get help.

Sarah Walker, senior youth worker and team leader for CSE, said: “This national day is the perfect opportunity for us to raise awareness in our community about CSE and to educate our young people so they know where they can get help if they need it.

“Between 12th and 23rd March the Jersey Youth Service team will be working in our secondary schools to raise awareness. We will be doing an Assembly to various year groups from Year 9 upwards and we will be taking a lunchtime interactive information stall to our secondary schools and colleges so that young people have the chance to ask questions.

“Saturday 17th March will be our chance to reach the wider community with an information stall in Don Street, in town, which will be staffed by people from various teams across various States departments and agencies.”

This week three hard-hitting commercials will be shown to raise awareness of CSE and the impact it is having on our island.

The three commercials, which will be airing on Channel TV and across social media, focus on the stories of three girls who are increasingly led down a path by an older boy who they believe cares for them, rather than the truth, which is that they are being exploited.

The commercials, filmed by local company Freedom Media, link in to a longer online video which shows how all of the girl’s stories overlap.
The adverts were filmed at locations including Parade Gardens, the skate park, Noirmont and outside the Brook clinic. 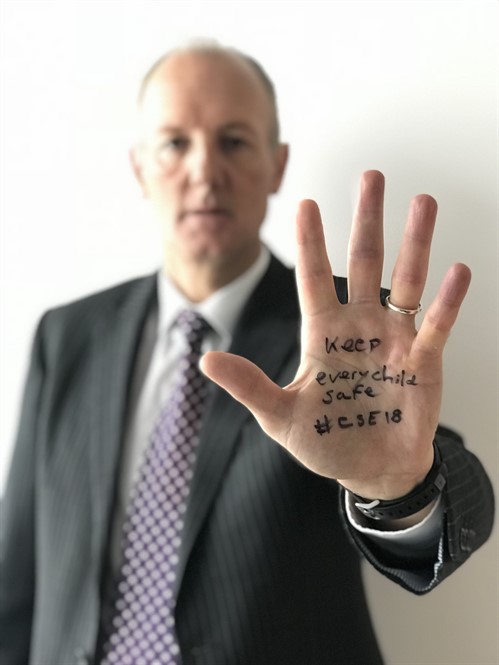 The sexual exploitation of children and young people under 18 is where a young person will receive something in return for, or be pressured into performing, sexual activities.
Firstly it is child abuse and puts young people at risk of damage to their physical, emotional and psychological health.
It can take many forms:
• A “seemingly” consensual relationship with an older boyfriend
• A young person having sex in return for attention, alcohol, cigarettes, gifts or lifts.
• On-line – young person encouraged to share indecent images (sexting) or perform sexual acts on webcam and other person then threatens to share images unless perform further acts
• Organised/networked CSE – serious organised crime
What are the warning signs?
• Unexplained gifts or money
• Using mobile phone secretly
• Significantly older friends/boyfriends
• Playing truant from school
• Missing from home
• Changes in appearance/behaviour
• Using drugs/alcohol