How can we help you?
Connect with Us Visit the station Contact us
Report a crime Report Lost Property Report Found Property Firearms certificates

In 2011 the FBI initiated Operation Kingdom Conqueror, and agents and officers from the Internet Crimes Against Children Task Force began investigating the sexual exploitation of children from an online bulletin board named Kingdom of Future Dreams. Hundreds of girls were sexually exploited both in the USA and internationally, with videos and images of them being traded online.

During this investigation agents discovered that the bulletin board was housed on a server located in Jersey and through cooperation with the States of Jersey Police, state and federal agents were able to track down members of the bulletin board who resided in the US. Further investigations revealed a second bulletin board called the Dark Moon, involving a highly complex encryption scheme. Agents gained access to the board in April 2013.

SoJP’s Detective Constable Patrick Forde was recently recognised for his superior performance in the prosecution of these 21 individuals, as the investigation required the collection of evidence from international sources and the use of innovative computer techniques.

Patrick, along with 9 other colleagues from the USA, was selected as a recipient of the 33rd Executive Office for the United States Attorneys Director’s Award for Superior Performance by a Litigation Team.

The Awards Ceremony was held on Friday 16th June in the Great Hall of the Robert F. Kennedy Main Justice Building in Washington D.C. and Patrick was flown, courtesy of the Department of Justice, to receive his award last week.

We at SoJP are extremely proud of Pat’s work and achievements and this international recognition just goes to show the skill level and volume of complex work that goes into all these types of high tech investigations.

Patrick is pictured below (centre) with US Deputy Attorney General Rod J. Rosenstein to his left and Monty Wilkinson, Director EOUSA (Executive Office for United States Attorneys) on his right. 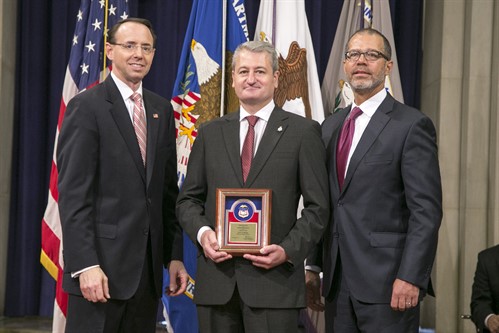 Report a crime Report Lost Property Report Found Property Firearms certificates
How can we help you?