Child sexual exploitation on the agenda

The Safeguarding Partnership Board is joining forces with island agencies and UK colleagues to raise awareness of child sexual exploitation (CSE) as part of an awareness day on Wednesday 18 March. 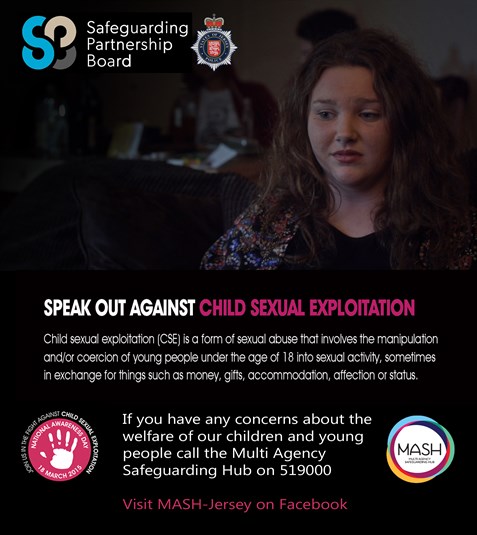 76 cases of suspected CSE were reported to professionals last year in Jersey. The statistic, released today, shows that there are serious concerns about the exploitation of young people in Jersey which are being regularly reported to the Multi-Agency Safeguarding Hub (MASH).

Detective Superintendent Stewart Gull, lead for CSE for the Safeguarding Partnership Board, said in the last year 254 young people had been recorded as going missing 392 times and that this, taken with other indicators, could be one of the key signs that a young person was being exploited.

Det Gull said: “CSE is such a sensitive subject and a type of crime that people may think would not happen in Jersey. The awareness day is to remind people that it can happen anywhere and we all have a duty to protect our young people from this kind of exploitation.

“CSE victims often do not see themselves as victims but rather in a loving relationship, they do not recognise they are being controlled by a manipulative individual and the reality of how they feel is usually something quite different.”

CSE is a form of sexual abuse that involves the manipulation and/or coercion of young people under the age of 18 into sexual activity.

The States of Jersey Police, were joined by other agencies last year, to embark on a high profile campaign last year to explain to the public what CSE is, who it effects and where to get help.

A week of activities have been planned to promote the awareness day, including:

Det Supt Gull said: “I would like everyone to watch the videos, look at the posters or talk to one of the agencies so they know all about CSE and if they are then ever concerned about a young person they know what the signs are and most importantly how to get them help.”

You can also download a CSE Awarness Brochure here