Respect message given to road users

The States of Jersey Police are planning a number of focus days to highlight the importance of interacting with one another safely in a shared space.

Over four days, the States of Jersey Police will be looking at road safety issues surrounding key road users – pedestrians, drivers, motorcyclists, cyclists and horse riders – and reminding each group that no one is more important on the roads and we all have a responsibility to keep each other safe.

In 2013 there were a total of 339 Road Traffic Collisions; 91 of which involved motorcycles or mopeds, 51 involved pedestrians and 52 involved bicycles. As a result of those accidents 277 people sustained slight injuries, 59 were seriously injured and 3 were fatal.

In 2014 there were a total of 327 Road Traffic Collisions; 79 of which involved motorcycles or mopeds, 48 involved pedestrians and 50 involved cyclists. As a result of those accidents 280 people sustained slight injuries, 46 were seriously injured and 1 was fatal.

As well as all the general road safety messages, this year’s campaign will be working in conjunction with TTS and Jersey’s Road Safety Panel, to also focus on the situation on Victoria Avenue, where pedestrians and cyclists come into conflict with each other on shared paths.

Although the cycle track on the Avenue is separated with a solid white line, the area is still used by pedestrians, cyclists, joggers and dog walkers and is known to get busy at peak times. TTS often receive complaints from the public about cyclists cycling in an antisocial way and putting people in danger. Vice versa, cyclists have made complaints about pedestrians not looking where they are going.

Dave St George, the Manager of the Transport Policy for TTS said: “We want to encourage people to use the path considerately and responsibly to prevent any accidents happening. It is important to remind all path users that they are equally responsible for their actions."

“As a cyclist it is important that you keep your speed down and watch out for others. If you go at an excessive speed you can be a danger and hazard to both yourselves and others. Pay particular attention to vulnerable users such as the elderly and small children who can be unpredictable and may stray into your path. When you are approaching people wearing headphones remember they may not be able to hear your bell."

“As a pedestrian you must remember to look out for cyclists and check both ways before crossing their path. Do not get distracted by music or mobile phones and always keep an eye on your surroundings.”

On Tuesday officers will launch the campaign by spending the day talking to cyclists and pedestrians on their commute to and from of work.

The Force’s Road Safety Officer, Police cyclists and members of TTS will all be based at ‘hot spots’ along the cycle track handing out leaflets, security marking bikes, and helping to raise awareness of the issues in these off road areas. Eye-catching posters will also be set up along the track all week, to warn both pedestrians and cyclists to watch out for each other and slow down. 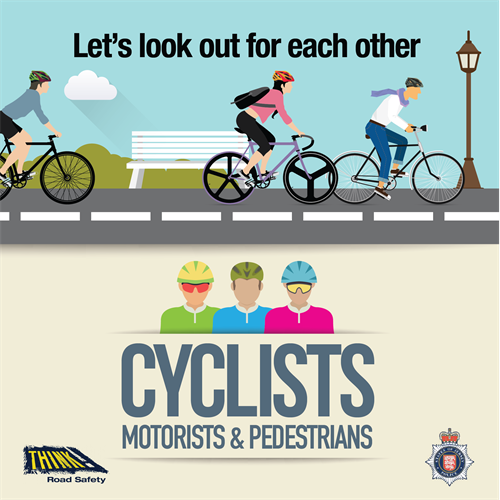 The States of Jersey Police’s Road Safety Officer, Philip Blake, who organised the event, said: “This is a different message for the States of Jersey Police, often we offer advice and try to educate people, however this time we wanted to remind people of their responsibility to one another both on the road and in shared spaces.  We hope this new poster campaign will remind cyclists to take care around pedestrians and remind pedestrians to be extra cautious around cyclists. This message is especially important as the weather improves and more people take to their bikes.”

The focus days, which carry the slogan “Let’s look out for each other” will be supported by online information via the Force website and social media channels. The support material will include key messages, safety advice, video interviews with specialists, helmet cam footage and interviews with the public.

Philip Blake said: “We have a huge amount of respectful road users, but there are some that insist on driving badly and even breaking the law. We won’t tolerate that behaviour no matter what their chosen mode of transport. We share the same roads, have the same rights and therefore we all follow the same rules.”