To mark Mental Health Awareness Week one of our serving officers has decided to share their experience of Post Traumatic Stress Disorder (PTSD).  Their simple hope is that by speaking out they may encourage somebody else who is suffering to seek the help they need. 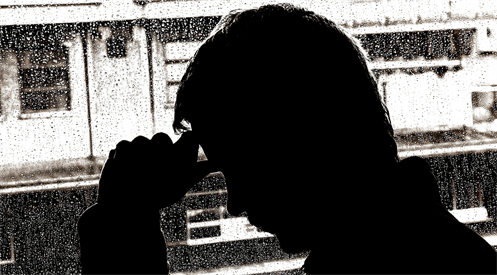 For me I was on a usual Friday day shift, we had not got a lot of resources available, being bounced from pillar to post, just small silly jobs with absolutely no time to catch up or do paperwork. I was having some issues in my personal life and had that playing on my mind. All day I felt like something was building up, I was getting aggressive with myself in the van which wasn’t me, I felt like at every job I went to I was composing myself to be the professional person that I am in the public eye.

I was due to finish at 5pm but around 4:15pm I got sent out to a domestic incident single crewed so I knew in my mind I wasn’t likely to finish on time. When I got back to the locker room I didn’t know what to do with myself. One of my oldest colleagues walked in and he said to me, “I wouldn’t normally do this but I feel like you need a hug”. He put his arms around me and I fell to pieces.

That was the moment my life fell apart.

I didn’t know what to do. I sat in the locker room with my head in my hands and cried.

I was joined by my acting Inspector who took me to a breakout room in the station, this was for my dignity and they were worried about others seeing me in that state. They left the room and I knew what I wanted to do. I picked up a knife, I won’t go in to the exact details of my plan, but I knew how I could do it. I’d seen someone do it like this before. The scary thing is the thought of doing it didn’t scare me. I had the knife to my throat when my acting Inspector opened the door to the room and I stopped- I didn’t want to do it in front of someone. I couldn’t do that to them.

Shortly afterwards the doctor arrived and with my acting Inspector I was taken to the Emergency Department at the General Hospital. I remember sitting on the bonnet of the car outside the hospital and knew my world had collapsed, I contemplated running away. I’d taken people through these doors so many times, I’d taken them into the room to be assessed, it was the strangest feeling that the patient was me.

I felt my life was over, I had nothing left.

During the assessment I sat and struggled to explain to a CPN that for months I was seeing images of incidents that I’d attended in my career. The sleepless nights and a breakdown of my relationship, I was a physical wreck. It seems easy to some to be able to talk but from a male’s perspective it’s definitely the hardest thing to do. At the end of the assessment the CPN said that there was no easy way to say it but they couldn’t let me leave. I went voluntarily with them to Orchard House. Everything in my world came crashing down.

I was there for five days, no contact with the outside world, in isolation because I knew some of the residents and staff. I kept visitors to a minimum as I felt that I’d let everyone down. It’s at that point Post Traumatic Stress (PTSD) was being spoken about, I had never even thought about it and knew very little about it other than like most that military personnel can have it.

At the time, I can only describe what I was experiencing was as though my mind being like a tumble dryer on very high spin with no off switch. My mind would drift from one thing to another, all past experiences, work and home life. It just didn’t stop.

The flashbacks to me are like a DVD player playing in my mind of Polaroid stills, vivid images and replaying incidents over and over in my mind. I can still draw you scenes from serious and fatal road crashes that I have attended, I can tell you where the body of someone was found by me from a fatal crash after being thrown from the car they had been travelling in. I picture addresses I’ve attended and found somebody who had committed suicide, going into a self-harm scene/ incident because no other service would enter as it was unknown if there was anyone else in there, not knowing what to expect or if they would turn the knife on me. Every horrific scene coming back, deaths, suicides, serious assaults, sexual assaults. They come rushing into your mind and you try to push them away, but as soon as you do, something else comes in to take its place. It feels like you are right back in them all, it was overwhelming and exhausting.

I recall one time I attended someone who was trying to commit suicide, they were in the middle of a breakdown and walked into the sea fully clothed. I ran into the water in full bike kit, I was joined by another officer and we got them out of the water. We had to carry this person up the beach to stop them hurting themselves. We took them to hospital and I sat with them in the same room I was now sat in. We spent hours talking to the person, sitting there and trying to reassure them that everything would be okay. They never spoke once, didn’t acknowledge us there but all of a sudden towards the end they leant over and put their head on my shoulder. I just said to them that everything was going to be ok. I wanted the same, just that shoulder to rest on. I wanted someone to try and fix things for me and take away the pain.

In this job you don’t really deal with what you see and experience, you just don’t have time. You push it to the back of your mind and place it in a drop box and move on to the next job, then something came along and completely blew the lid off Pandora’s box and it wouldn’t stop overflowing.

People ask how you spent your time off a lot. I would say to those people reading this that when someone says they are in a dark place it is exactly that. For me, I had a lot of days where I struggled to face even getting out of bed, let alone a shower or shave.

If there were days I got the courage to venture out it would only take a small thing to trigger me and I would retreat back to the safety of home and lock myself away from everyone and everything. I would often find myself sat curled up on the lounge floor in fear and in tears. With my mind spiralling out of control back to the dark places and thoughts of ending it all to ease the pain.

Please understand that yes we all get the calls from friends saying to call them as they will be there for you. The trouble is, in my mind especially, it felt like I was a burden on them, that they have their own lives and problems and most of all you reach a point in the dark places that you don’t want to and can’t reach out.

I have been asked by people in the medical profession “did the thought of taking your own life not scare you.” I can say that through my career I have seen death in a lot of different formats, from sudden death to suicide and road traffic deaths. It has numbed my outlook on life and death and can safely say, and I have openly admitted to them, that I have no fear of death or my ability to take my own life.

A few months on and I’m getting stronger and putting my life back together professionally and personally, I find talking about my experiences a little easier. I still get days where I am low and have thoughts of not wanting to be here, these are thankfully few and far between. I know how I will do it and likely places to use.

It’s hard dealing with the things you see in a career with any of the emergency services. It’s certainly not something you’d ever want your loved ones to know about or discuss with them, so we store them away, but don’t deal with them. I know that these memories will never leave me and I have come to accept that. I remember being sat with my girlfriend one day and she asked why I was being so quiet. I so wanted to tell her what was going on but I felt I could only pass it off to her as I just had some work stuff on my mind plus another excuse and apologising for my quietness to her. Here in Jersey we obviously don’t see things on as regular basis as our UK colleagues, but I think people don’t realise or consider the horrific things that we do deal with, see and are exposed to.

To look at I’m probably the last person you would expect to be diagnosed with PTSD and believe me I never saw it coming, but if we don’t deal with things they just may come spilling out when you least expect it, the bottom comes crashing out of your world. I would like people to know that it’s ok to say I’m struggling, I can’t sleep, I’m struggling in my private life, I’m not coping at work or I need to talk to someone.

I wish I could report the fairy tale ending for me. Unfortunately at this moment in time it’s not there and uncertain. The main thing for me is that at least my battle/ journey with PTSD is under much better control with counselling and other techniques. I have opted for a non-medication route in bringing this under control. This path hasn’t been easy by any means and the thought of medication has been appealing, the first hurdle has been that these horrific memories will never leave me. Thankfully, I have one or two few good very close friends who have been there when I’ve needed extra support. I cannot thank my CPN enough, the guys from Rock 2 Recovery UK have been truly amazing, as has my psychologist.

For me, I’m just hoping if someone else sees this article and gets help, then I would be happy and makes this journey a worthy one.  I am hoping that access to professional help can be a smoother one for colleagues who are starting to struggle rather than it getting to a crisis point.