10 - 17 October 2020 was National Hate Crime Awareness Week and in 2019, the States of Jersey Police (SoJP) launched an Island-wide campaign aimed at increasing awareness and understanding of hate crime.

The campaign was developed in conjunction with community groups and features Jersey victims and community leaders talking about their experiences of hate crime in the Island, and how either they, or the victims they represent, have been impacted.

Hate crime can be defined as acts of violence and hostility directed at a group or individual because of who they are, or who someone thinks they are, based on their race, religion, age, disability, sexual orientation or transgender identity.

The true extent of hate crime in Jersey is not fully understood because it is believed to be significantly under-reported.  SoJP want to reassure the public that they take hate crime very seriously and would always encourage people to come forward and report.

Incidents can have a significant impact on the victim and their community group, including anxiety, depression and fear to leave the house.

SoJP developed a hate crime policy, which places an increased emphasis on all crimes reported, ensuring that dedicated supervisory oversight is immediately provided and that prosecution of any hate crime is fast-tracked. 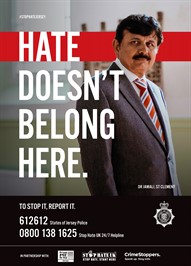 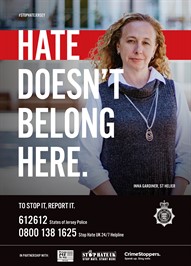 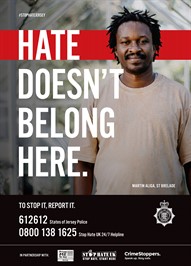 Inspector Huw Williams said: ‘We know that Hate Crime is still very under-reported in Jersey and we want to reassure Islanders that it is something we take very seriously; no-one should be subjected to abuse for just being themselves.
‘If you yourself have been a victim, or you have witnessed a Hate Crime, please get in contact with the Police; there is no room for hate in Jersey.’

As part of the campaign, SoJP have partnered with Stop Hate UK.  Victims, witnesses and third parties can call their confidential and independent 24 hour helpline for support and guidance.

Rose Simkins, Chief Executive of Stop Hate UK said: ‘Having access to our range of reporting services gives all those directly affected by, and witnesses of Hate Crime, a safe and independent place to talk about their experiences and to explore their options for taking things further.

‘We are able to support people who feel they have nowhere else to turn, and contact with us might be the first time an individual has talked to someone about the things they are experiencing. No one should have to suffer Hate Crime in silence, but working together with SoJP, we can help to make a difference in Jersey.’

SoJP continue to be partnered with True Vision, an online reporting mechanism with a dedicated Jersey page and StopHateUK, a UK based charity that provides 24 hour independent advice, guidance and support to the victims of hate crime and concerned third parties.

For those with visual impairments, you can download the campaign accessibility stills below.