Jersey has an important border location in the UK's Common Travel Area.

Threat levels are designed to give a broad indication of the likelihood of a terrorist attack. 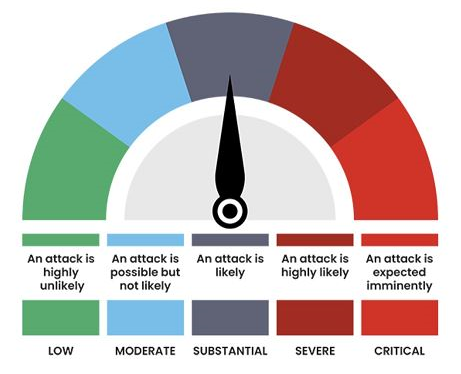 The threat to the UK (England, Wales, Scotland and Northern Ireland) from terrorism can be found here: https://www.mi5.gov.uk/threat-levels

The threat to Jersey from terrorism is: MODERATE - an attack is possible but not likely.

How is the Threat Level determined?

The UK Joint Terrorism and Threat Analysis Centre (JTAC) assess all available information and produce the threat level for the UK.

Due to the geographical and separate governmental differences, local assessments are carried out by the Counter Terrorism Policing Unit of the States of Jersey Police.

Although the risk of a terrorist attack in Jersey is unlikely we should not become complacent. The threat from a lone individual or a group of individuals involved in terrorism still exists. The unique nature of the island means that the short and long term impact of any such attack may be greater than that of a UK city.

We urge the public to remain vigilant and report your concerns.

If you are planning a trip abroad and are concerned about safety, you can visit the Foreign and Commonwealth Office online.

Firearms and Weapons attacks are rare in the UK. The ‘STAY SAFE’ principles tell you some simple actions to consider at an incident and the information that armed officers may need in the event of a weapons or firearm attack:

RUN
Escape if you can
Consider the safest options
Is there a safe route? RUN if not HIDE
Can you get there without exposing yourself to greater danger?
Insist others leave with you
Leave belongings behind

HIDE
If you cannot RUN, HIDE
Find cover from gunfire
If you can see the attacker, they may be able to see you
Cover from view does not mean you are safe, bullets go through glass, brick, wood and metal
Find cover from gunfire e.g. substantial brickwork / heavy reinforced walls
Be aware of your exits
Try not to get trapped
Be quiet, silence your phone and turn off vibrate
Lock / barricade yourself in
Move away from the door

TELL
Call 999 - What do the police need to know? If you cannot speak or make a noise listen to the instructions given to you by the call taker
Location - Where are the suspects?
Direction - Where did you last see the suspects?
Descriptions – Describe the attacker, numbers, features, clothing, weapons etc.
Further information – Casualties, type of injury, building information, entrances, exits, hostages etc.
Stop other people entering the building if it is safe to do so